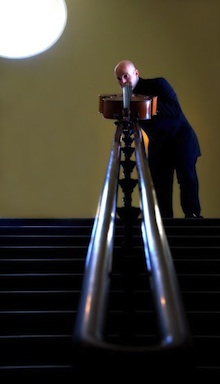 “After having traveled, performed, and educated in many parts of the world, I recognize the incredible challenge that comes with leaving out musical education for our younger generations. It is atrocious and hair-raising that there is not a core curriculum that begins in elementary education and instills skills such as reading music, obtaining a basic understanding and appreciation of a wide variety of musical styles, and being skilled at playing at least one instrument which is a member of the classical symphony orchestra.”

It is very good to remind ourselves that prior to speech, mankind used sounds and musical sounds as tools of communication. The history of music, for an example, the music of Jewish roots stems several thousands of years ago and spans in the area of religious music, the evolution of cantorial, synagogal, and melodies of holy scriptures, since the biblical times. Musical notations is found in the holy scriptures too and is one of the most ancient forms of notated music which is practiced today, all over the world. Historic documents detail how music was practiced as the very tool of healing and rehabilitation since ancient times, by the Chinese, Hindus, Persians, Egyptians, Greeks and the Arabs.

Plato, who made music a core curriculum of his academy, said that he would teach the child music, physics, and philosophy, but most importantly, music, because the patterns in music and all of the arts are the very keys to learning. Aristotle recognized that the power of music produced a certain effect on the moral character of the soul and, because of this force to do so, the young should be directed to music and educated in it. It was neither a sculptor or painter, nor an artist or musician, but a professor of physics and mathematics, the one and only Albert Einstein, who played the violin, and who most passionately advocated for the practice of classical music. Ambitious and far-sighted parents of future mathematicians and engineers and scientists are reminded again that solving challenging formulas and being creative overall, will produce no true productive results and development, unless playing great classical music becomes the science driver and force driving their innate creativity. A classical musician must not necessarily take interest in mathematics and science but mathematicians and scientists should always attend to playing great classical music. Intellectuals, philosophers and poets who praised the utmost importance of classical music, Count Lev Nikolayevich Tolstoy, Boris Pasternak, Ivan Sergeyevich Turgenev, Marie-Henri Beyle also known as ‘Stendhal’ by pen name, Jean-Jacques Rousseau and Romain Rolland, who conquered many foreign languages, recommended that all future generations of polyglots play classical music. Johann Wolfgang von Goethe believed too that mankind should hear music, read poetry and explore fine arts every day of his life in order that the worldly cares may not obliterate the sense of the truly beautiful and divine which God implanted in the human soul.

It is excellent to recognise as a sense our organ, the ear, is fully developed as early as birth. Our brain is geared to store and organise already the impressions it is given. By the age of two a child’s unique powers of observation and imitation will be repeated and therefore should be accompanied by all means, by great classical music. A very good beginning is music by Arcangelo Corelli, Antonio Lucio Vivaldi, Johann Sebastian Bach, Franz Joseph Haydn, Wolfgang Amadeus Mozart, Ludwig van Beethoven, Franz Peter Schubert, Jacob Ludwig Felix Mendelssohn Bartholdy. Compositions by these composers will help develop the foundation for rational responses, neurological control patterns and strengthen the wiring from mind to heart, also known as, feeling! These creative engineering techniques are best taught in the child’s earliest and most formative years. Neuron connections are developing and responsible for all types of intelligence and our brain develops with the exposure to the enriching experience of classical music which is vital enrichment from the earliest of childhood and as life-urgent as the mother’s milk for the baby.

“Every day, man should spend an hour playing the music of Johann Sebastian Bach.”

The more exposure to great classical music all of us enjoy, the better. And there can not ever be too much exposure to classical music for the child or anyone else beginning their journey of musical discovery. All children should be exposed to classical music daily, shaping as early as possible their musical response and sensitivity and manifesting the knowledge of music and innate pleasure. The practice of music which must occur on a regular basis, daily, will equip the child with a life-long creative development, self-discipline, self-esteem and most importantly, developing vital skills of critical thinking. The art of nobility, classical music, and the art of music education needs to be seen as an integral part of any teaching progress. Make sure that your child lives with music everyday. Play an instrument for the child, play records and take the child to liveperformances, at meal times, play times and bedtimes.

Recordings exhibiting the repertoire of the opera and symphonic literture is excellent to encompass fully, and listening daily to musicians and artists such as violinists Fritz Kreisler, Jascha Heifetz, Michael Rabin, cellists Daniil Shafran, Emanuel Feuerman, Gregor Piatigorsky and pianists Vladimir Horowitz, Arthur Rubinstein and Sergei Rachmaninoff, is strongly recommended for babies and children of all ages. It is crucial then in adolesence to begin studying the activities of the greatest conductors who ever lived. Listen and watch footages of recorded and filmed rehearsals and concerts. Start with Maestro’s such as Fritz Reiner, Bruno Walter, Arturo Toscanini, Yevgeni Mravinsky, Jascha Horenstein, George Szell, Sergiu Celibidache, George Solti, Kiril Kondrashin, Gennady Rozhdestvensky and John Eliot Gardiner.

Classical music is the strongest contender for building character and personality. In a broaden sense of personality, one should understand the whole complexity of character traits, type of higher nervous movement, the mental depository and advancement, habits, tendencies and the powers of emotional experience which can not separate mind and heart. In the law of nature there can be no repetition. Just as no two identical creatures in the vegetation and animal world exist, no two beings are identical in the human environment. Two people with the same anatomical structure and with the same physiology and psychology do not occur. The very significant factor of inheritance should be pointed out. Heredity is a biological law and beyond the power of our will, it is what a person is born with. This law might be manipulated by science, but we must consider heredity as a given and never ignore it. A person at birth already carries some or other tools that with most certainty will affect the formation of future personality. Heredity is not exclusively shown and manifested in external resemblance: the anatomo-physiological traits of a person, such as the shape of hands, fingers, head, individual facial features. Genes, these bearers of inheritance, often convey character traits, civilities, tendencies and contributions in one field of human activity. From ancient times numerous family professions were repeated and brought down from generation to generation. There are numerous examples of how whole villages were named according to the age-old ancestry of glassblowers, blacksmiths, bakers, bricklayers, iconpainters and writers, and musicians! For sixty years, Beethoven’s ancestors were court musicians at the courtyards in Bonn. His grandfather was a court singer-bass. The composer’s father was also a musically gifted man. From twelve years he became a court musician, later a court tenor, and played harpsichord and violin. Franz Peter Schubert’s father was a music teacher. Richard Strauss’s father was a very gifted man with universal abilities. Not only was he a windplayer and virtuoso, but he could play other instruments as well. He composed ten trios for brass instruments, at eighty years of age. His mother was also distinguished by musicality. Ten generations of the Bachs were musicians, mainly court organists. The Catalonian cellist, (Pau) Pablo Casals, who was seized under the regime of Franco during WWII revived from its neglect: “the Unaccompanied Suites” by Johann Sebastian Bach. He was the son of a Catalan musician. In his memories Casals writes; “Since early childhood, music has been as natural for me as, say, breathing. I already sang before I could speak”. These manifold examples could be continued until infinity.

It is equally important in what environment the personality grows and develops. The public environment, especially family, in the first place, affects sometimes more the formation of human personality. Impressions of children’s earliest years often affect a person’s entire future life. Children’s most early years have a special impression, the child absorbs their environment like a sponge absorbs moisture. But the public environment is not only about family. It is about kindergarten, school, educational institutions, and functions like a dormitory where students live for some years. Finally, it is the collective which has to come to fruition. Thus, if we consider inheritance as the first factor, then the second and no less significant component forming human personality should be called the public environment, the environment in which the individual develops.